THE ENVIRONMENT IN THE NEWS

The US and Brazil remain the two largest producers of ethanol. In 2010, the US generated 49 billion liters, or 57% of global output, and Brazil produced 28 billion liters, – 33% of the total. Corn is the primary feedstock for US ethanol, and sugarcane is the dominant source of ethanol in Brazil.

“In the US, the record production of bio-fuels is attributed in part to high oil prices, which encouraged several large fuel companies, including Sunoco, Valero, Flint Hills and Murphy Oil, to enter the ethanol industry” says Alexander Ochs, director of Worldwatch’s climate and energy program.

High oil prices were also a factor inBrazil, where every third car-owner drives a “flex-fuel” vehicle that can run on either fossil or bio-based fuels. Many Brazilian drivers have switched to sugarcane ethanol because it is cheaper than gasoline. “Although the US and Brazilare the world leaders in ethanol, the largest producer of bio-diesel is the European Union, which generated 53% of all bio-diesel in 2010,” says Ochs. “However, we may see some European countries switch from bio-diesel to ethanol because a recent report from the European Commission states that ethanol crops have a higher energy content than bio-diesel crops, making them more efficient sources of fuel.”

END_OF_DOCUMENT_TOKEN_TO_BE_REPLACED 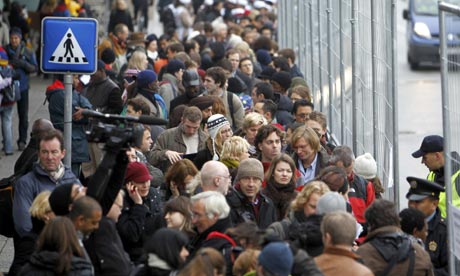 2 degrees Celsius is seen by mainstream science as a threshold for dangerous climatic changes including sea-level rise and accelerated glacier melt, as well as more intense floods, droughts, and storms. Many scientists also believe that a majority of worldwide ecosystems will struggle to adapt to a warming above that mark, and more recently have set the threshold even lower, at 1.5 degrees Celsius. The accord, however, lacks any information on how this goal of preventing “dangerous” climate change, which had already been set by the 1992 United Nations Framework Convention, would be achieved. It is generally assumed that in order to keep global warming below 2 degrees, worldwide emissions have to END_OF_DOCUMENT_TOKEN_TO_BE_REPLACED

On March 25, at a workshop in Santiago, Chile, I presented our research teams’ results on Mexico and Brazil as part of CCAP’s Developing Country Project. We held the workshop at the headquarters of the Economic Commission for Latin America and the (also a co-host of the event). Officials from seven South American nations attended the workshop, gathering to discuss the status of the international climate change negotiations and to hear about the climate-related research CCAP teams in and had conducted. The topics of discussion included:

• Nationally appropriate mitigation actions, a key feature of the Bali Roadmap;
• Analysis of GHG mitigation options in Brazil’s forestry sector;
• The GHG and other implications of expanding the production of biofuels, both ethanol and biodiesel, in Brazil; and
• Lessons learned from a first attempt to propose sectoral goals for GHG emissions in Mexico’s cement and oil refining industries.The participants expressed a strong interest in seeing this work continue and for the project to expand into other countries, such as and . The CCAP Developing Country Project is funded by the UK Department for Foreign Investment and (UK DFID), the William and Flora Hewlett Foundation and the Tinker Foundation.

Please find my introduction here: ochs-chiledfidworkshopintro_090325.pdf
and my presentation on NAMAs and the Global Deal on Climate Change here: ochs-chilenamatheglobaldealoncc_090525.pdf