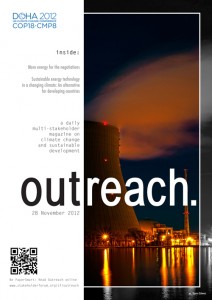 More than half of all human-caused greenhouse gas emissions result from the burning of fossil fuels for energy supply. Even excluding traditional biomass, fossil fuel combustion accounts for 90 percent of carbon dioxide (CO2) emissions. Against this background, it is surprising how limited a role energy is playing in the ongoing climate negotiations. And yet this discussion could be instrumental in refocusing the debate about what is necessary and what is possible in both the areas of climate mitigation and adaptation—bringing it back down from the current inscrutable spheres of negotiation tracks, subsidiary bodies, parallel sessions, ad-hoc working groups, and special meetings (which, let’s be frank, nobody outside the negotiators understands anymore).

First, a focus on energy shows how far we are from solving the climate crisis. Energy-related CO2 emissions grew 3.2 percent in 2011 to more than 31 gigatons—despite the economic crisis. We know that if we don’t want to lose track of the 2-degree Celsius threshold of maximum warming that would hopefully avoid major disasters, energy emissions must decline by at least one third to 20 gigatons in 2035, despite expectations that energy demand might double in the same time frame. .

So the challenge is enormous. But—and this is where the good news starts—clean energy solutions are at hand, ready to be implemented. The costs for wind, solar, sustainable hydro, biomass and waste energy technologies all continue to fall rapidly, and, in many markets, they are becoming price competitive with fossil fuels—even if externalities and fossil fuel subsidies are not internalized. If they are, the cost that our societies pay for our continued reliance on fossil fuels becomes truly outrageous: Coal, responsible for 71 percent of global energy-related CO2 emissions, causes more than US$100 billion in local pollution and health care costs annually in the United States alone, in addition to the personal hardships of those suffering from these impacts. Add the costs for climate change, and it becomes incomprehensible why our societies continue down the fossil path despite the availability of alternatives.

END_OF_DOCUMENT_TOKEN_TO_BE_REPLACED 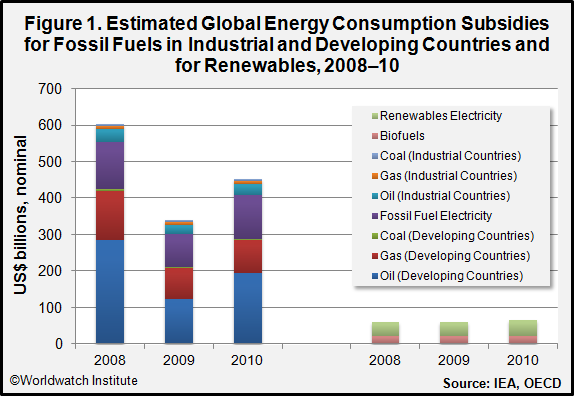 WASHINGTON, May 30 (IPS) – If a series of “golden rules” can be followed, a new report from the International Energy Agency (IEA) suggests, global natural gas usage could grow by more than 50 percent by 2035.The report, released on Tuesday, came under sharp criticism from environmental groups for charting a route to a “golden age” in the extraction and use of natural gas.
(…)
“We have an opportunity for natural gas to address the intermittency problems of renewable energy sources – it could become an ally of renewables,” Alexander Ochs, the director of the climate and energy programme at the Worldwatch Institute here in Washington, told IPS. Ochs also reviewed a draft of the IEA report.

Ochs says that there are a number of actors within the gas sector that will welcome the new IEA recommendations as a way of cutting down on the potential of a future environmental catastrophe that could lead to industry-damaging policy restrictions.

Ochs does warn that the report underplays the potential use of renewables in the upcoming decades, however, by suggesting that green technologies other than hydro will only make up five percent of total energy demand in the next quarter century.

“I think the IEA could well be wrong in the numbers it’s using. Technically and economically, more than half of our electricity could come from renewables as early as 2030,” he says.

“But if gas sees a golden age and becomes cheap globally, it could get in the way of renewables. Then, rather than being an enabler, it becomes a deal breaker.”

Gobal fossil fuel consumption subsidies fell to $312 billion in 2009 from $558 billion in 2008, a decline of 44.1 percent.[i] The reduction is due primarily to changes in international energy prices as well as in domestic pricing policies and demand, rather than because the subsidies themselves were curtailed. The number also does not include fossil fuel production subsidies that aim at fostering domestic supply, which are estimated at an additional $100 billion globally per year.[ii]

Fossil fuel consumption subsidies include public aid that directly or indirectly lowers the price for consumers below market price. The International Energy Agency (IEA) defines energy subsidies as “any government action directed primarily at the energy sector that lowers the cost of energy production, raises the price received by energy producers or lowers the price paid by energy consumers.”[i] Common means of subsidizing energy include trade instruments, regulations, tax breaks, credits, direct financial transfers like grants to producers or consumers, and energy-related services provided by the government, such as investments in energy infrastructure or public research.[ii] Many observers believe that fossil fuel subsidies should be phased out because they reduce the competitiveness and use of cleaner, alternative energy sources . 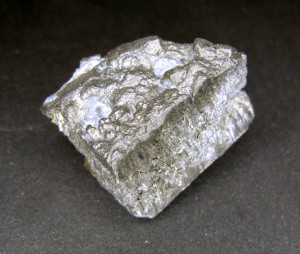 Climate change and the secure supply of energy are among the biggest challenges of the twenty-first century. The problem is immense: While global greenhouse gas (GHG) emissions are still on the rise, they will have to be halved by the middle of this century in order to prevent the most dangerous effects of global warming. And while energy-related emissions are already responsible for the largest share of GHG emissions, global energy demand is estimated to rise by 50 percent or more between now and 2030.
Climate change and energy security can be seen as Siamese twins insofar as they can only be sustained with concern for one another: 80 percent of global energy supply is produced from fossil fuels which, in the United States, Europe, Japan and other important U.S. ally countries, are increasingly imported and therefore are at the core of their increasing energy dependence. The burning of fossil fuels also emits CO2, and energy-related CO2 emissions are responsible for about 60 percent of man-made climate change.
The security impacts of climate change and our dependence of fossil fuels have been much debated. It is in the national interest of the United States to address both issues vigorously. There has been little academic and political discussion, however, about the security impacts of a transition of our economy to one that is built on a low-carbon energy foundation. What are the foreseeable material input demands and what human capacities are needed for such a transition? This paper addresses these questions under a particular scenario in which the United States commits to GHG reductions as party to an international climate change agreement.