According to the Worldwatch Institute, global energy intensity has been growing faster than the global economy for the past two years. Worldwatch observed that worldwide energy intensity grew 1.35 per cent last year, surpassing global economic growth. Unless economies all over the world shift to sustainable development, global energy intensity will keep on increasing. Energy intensity is total energy consumption divided by gross world product. Between 1981 and 2010, it decreased by about 20.5 per cent or 0.8 per cent annually. “During this period of decline, most developed countries restructured their economies, and energy-intensive heavy industries accounted for a shrinking share of production,” stated Haibing Ma, manager of Worldwatch’s China programme. “New technologies applied to energy production and consumption significantly improved efficiency in almost every aspect of the economy,” particularly during the surge of ‘knowledge-based economy’ from 1991 to 2000. Global economic productivity increased without parallel increases in energy use.

END_OF_DOCUMENT_TOKEN_TO_BE_REPLACED 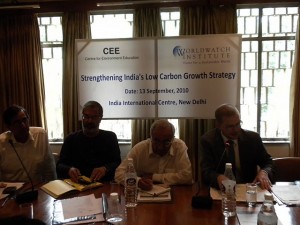 END_OF_DOCUMENT_TOKEN_TO_BE_REPLACED

In preparation for its September 13, 2010 workshop bringing together leaders in Indian low carbon development, Worldwatch conducted interviews with twenty top experts in the field to gain a sense of the current state of thinking and frame the debate for the event. The set of questions were aiming at insights from ten issue areas: challenges to low carbon growth, whether low carbon development is in India’s interest, emissions pathways, the National Solar Mission, the National Mission on Enhanced Energy Efficiency, policies for sustainable business models, opportunities in infrastructure, technology and IPR, international competitiveness and finally international leadership. For better illustration of the arguments given, we added a table on future emission scenarios as well as a summary of the government’s National Action Plan on Climate Change to this document.

2 degrees Celsius is seen by mainstream science as a threshold for dangerous climatic changes including sea-level rise and accelerated glacier melt, as well as more intense floods, droughts, and storms. Many scientists also believe that a majority of worldwide ecosystems will struggle to adapt to a warming above that mark, and more recently have set the threshold even lower, at 1.5 degrees Celsius. The accord, however, lacks any information on how this goal of preventing “dangerous” climate change, which had already been set by the 1992 United Nations Framework Convention, would be achieved. It is generally assumed that in order to keep global warming below 2 degrees, worldwide emissions have to END_OF_DOCUMENT_TOKEN_TO_BE_REPLACED