South and Central America could generate 100 percent of their electricity with renewable resources, a new study finds

By Lisa Friedman, Climatewire, picked up by Scientific American [here] and others

Latin America and the Caribbean could meet 100 percent of their electricity needs with renewable energy, a new Inter-American Development Bank study finds. From Mexico to Chile, countries already are producing higher levels of clean power, but the study notes the region still has a long way to go. Last year just 5.4 percent of the $244 trillion global renewable energy investment went to Latin America. But with Latin America’s economy expected to grow 3 percent annually, the study argues that the region will need to nearly double its installed power capacity to about 600 gigawatts by 2030 at a likely price tag of $430 billion.

The report, “Rethinking Our Energy Future,” will be released today at a Global Green Growth Forum meeting in Bogota, Colombia. It comes amid growing concern among energy experts that the region is not living up to its clean energy potential. (…)

Last week the Worldwatch Institute think tank in Washington, D.C., unveiled a Central America report also showing the region has the resources and the technical capacity to meet all its electricity needs with renewables. But, it argues, governments are undermining their own investments in geothermal, biomass, wind and solar with plans to increase imports of oil, coal and natural gas.

“Central America is at a crossroads,” Alexander Ochs, director of climate and energy at the Worldwatch Institute, said in the study. According to the study, Latin America currently generates about 7 percent of the world’s total electricity production, but demand is skyrocketing as population levels rise and the region’s economy improves. By midcentury, Latin America’s power demand is expected to triple while carbon emissions from the power sector will double. 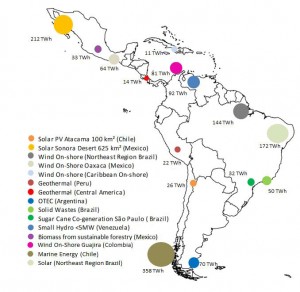 Even though coal and oil are only slivers of the region’s energy matrix, the report notes that the share of fossil fuels in Latin America’s power mix — particularly natural gas — could rise to 40 percent by 2050, even as the share of hydropower dips.

Some movement to solar
Meanwhile, the report notes that a number of countries have installed large-scale solar photovoltaic systems and about 2 GW could be installed across Latin America by 2016. Wind capacity in Latin America reached 3.5 GW last year, an increase of 53 percent compared with the previous year, and countries like Mexico, El Salvador and Guatemala are ramping up geothermal.

Feed-in tariffs also are becoming more popular. The study notes that in the past decade, Argentina, Brazil, the Dominican Republic, Ecuador, Honduras and Nicaragua have instituted some type of advanced renewable energy payments with in recent years a “strong trend” toward competitive bidding in some of those same countries and others.

The report, though, argues for a new energy market that involves a different mix of generator types, flexible technologies, and a reform of electricity market regulations and policies to give renewable energies “a truly level playing field” with fossil fuels.

The authors noted, “Countries and regions that take the lead in developing these new energy sources will have first-mover advantage in one of the world’s fastest growing economic sectors — reaping the economic growth and job creation that will flow from it.”