The challenge of addressing climate change inspires fierce, divisive debates, pitting science against politics, environmentalism against commerce, and the most powerful nations in the world against their less-developed neighbors. Roger Pielke, Jr. , professor of environmental studies at the University of Colorado , bridges columnist, and a renowned expert on science and public policy, attempts to take on this challenge. In his new book, The Climate Fix: What Scientists and Politicians Won’t Tell You About Global Warming , he seeks to propose a novel, alternative way of looking for solutions for the climatic changes the earth is experiencing. 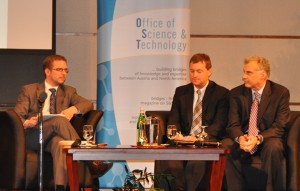 The Office of Science and Technology at the Embassy of Austria chose the occasion of the publication of this book to invite Roger Pielke, Jr., and two more experts on the issue – David Goldston and Alexander Ochs – for a debate with the audience on global climate-change policy. David Goldston is the director of Government Affairs for the Natural Resources Defense Council and previously served as chief of staff for the chairman of the US House of Representatives’ Subcommittee on Science and Technology. Alexander Ochs works for Worldwatch Institute, directing its Climate and Energy Program.

[Read the rest of the event report on the bridges website]

The average sea level around the world has risen a total of 222 millimeters (mm) since 1875, which means an annual rate of 1.7 mm.1 (See Figure 1.) Yet at the end of this long period, from 1993 to 2009, the sea level rose 3.0 mm per year—a much faster rate.2 An estimated 30 percent of the sea level increase since 1993 is a result of warmer ocean temperatures that cause the water to expand (thermal expansion).3 Another 55 percent of the increase results from the melting of land-based ice, mainly from glaciers and the Greenland and Antarctic ice sheets.4 (Sea ice that melts does not contribute to sea level rise, as the volume remains constant.)5 The other 15 percent of the rise is due to changes in terrestrial freshwater dynamics, such as wetland drainage and lowered water tables.6

Ocean warming and land-based ice melt have happened in tandem with other climatic changes during the last century. These changes include rising atmospheric temperatures, acidification of ocean waters, and changes in seasonal water cycles—all of which are linked to a dramatic increase in atmospheric greenhouse gases. Prior to the industrial revolution, the atmospheric concentration of carbon dioxide—a major greenhouse gas—was steady at around 280 parts per million (ppm).7 Since then, human activities such as the burning of fossil fuels and land use changes have boosted this concentration to over 385 ppm, nearly a 38-percent increase.8

The world’s oceans absorb 80–90 percent of the excess solar radiation trapped on Earth by greenhouse gases.9 But because the ocean’s mass is so much greater than the atmosphere’s, the oceans warm at a slower rate. From 1969 to 2009, atmospheric temperatures rose 0.36 degrees Celsius while the temperature in the upper ocean (the area down to 700 meters) rose 0.17 degrees.10 (See Figure 2.)

[Read the rest of the article in Vital Signs]